Kabbalah and the Tree of Life

Let me begin with a very simple explanation of the The Kabbalah and the Kabbalah Tree of Life. The word Kabbalah means “That which has been received.” Rabbi Aryeh Kaplan in Inner Space says, “Kabbalah is the ultimate synthesis of mysticism and logic. It’s purpose is to experience the reality of God in our lives.” Jason Shulman in his book Kabbalistic Healing says about the Kabbalah, “Kabbalah for me is the living experience of the Real Self, the self that is always connected to God, the self that lives in God the way a fish lives in water: water inside and water outside.” The Kabbalah Tree of Life embodies ten energy essences that are in constant interplay which underlie all of the Universe. These qualities are fundamental conditions that Life in this Universe finds itself in. I believe the numbers zero through nine are these fundamental conditions of Life.

An example tree of life and explanation: 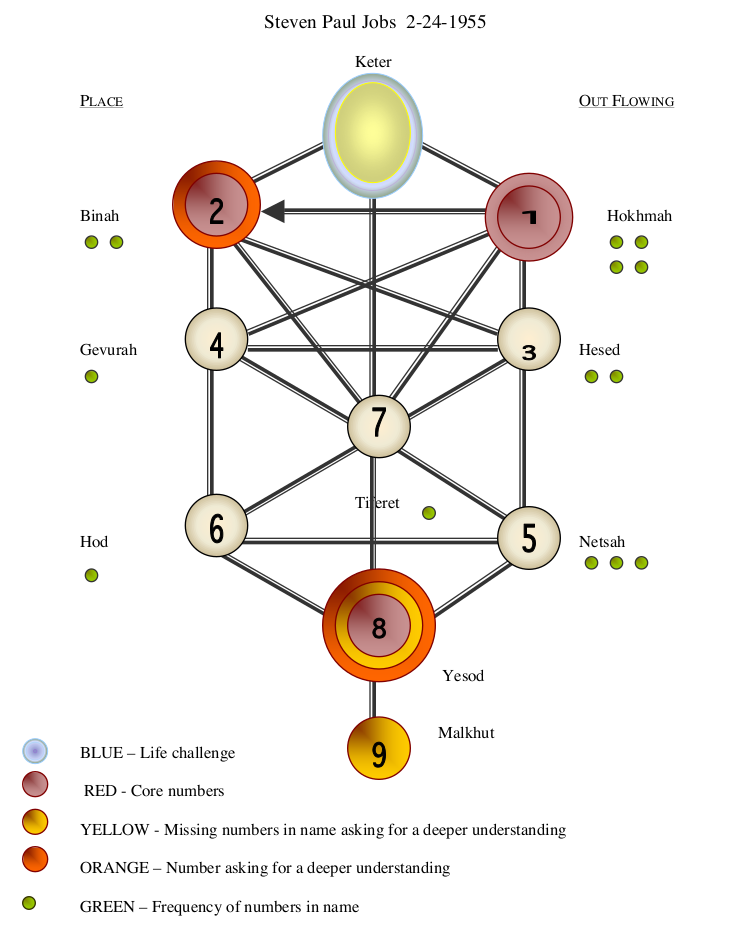 I have chosen Steve Jobs’ Numerology chart to put on The Tree of Life because it is quite simple to explain and understand. Let’s start at the top of the Tree of Life and work down. The top circle with a blue outline is called Keter or Nothingness. It is not numbered because it is zero or nothing. The blue circle around Keter is Steve Jobs’ Life Challenge, which is being willing to be with the unknown. There are four Core Numbers in a numerology chart, that come from the sum of a persons birthday, Name at birth, Vowels and consonants. Each letter of the alphabet corresponds to a particular number example, A = the number one, B = the number two and so on. Two of these four core numbers are the number one or Hokhmah in his chart. The number two has a red and orange circle, the red circle is a Core number the orange circle is asking for a deeper understanding in his life. The number two on the Tree of life is called Binah. I call these three qualities number zero, one and two “The Components of Creation.” When someone has these qualities they embody the components to create anew. Steve Jobs embodied these qualities; you could say he was a creating machine. Let’s look at each of these three numbers individually.

“0” The Unknown, The Featureless Place that calls in the Spark of Life.

“1” The Spark of Life, the Glimmer of the New, allows itself to be called into zero the Unknown. The spark, that still small voice that calls us into creating the new.

“2” The Dance, Intimacy, Difference, This and That, distinct but not separate, relationship, that gives rise to “New Creations”.

My sense is that the call to create consumed Steve Jobs' life.

The number nine is a yellow circle meaning he has no letters in his name that correspond to nine. This quality is about truly incarnating into life. The number nine is asking for a deeper understanding into the Nature of Life. As with the definition of the world Kabbalah, “That which has been received” nine is open, receives and reflects what’s here as it Is.